Friends of Bradford and Telegraph and Argus event

On Sunday 17th April we held another fundraiser, this time in Bradford at the Royal Taj restaurant.

The Telegraph and Argus article written about our event is available below.

We are extremely grateful for all those who attended and enabled us to raise an incredible £17,530!!

A CELEBRATION event has been held in Bradford to thank people who supported a Telegraph & Argus appeal to help build a £2.3 million hospital in Pakistan.

The Midland Doctors Association (MDA) opened its medical institute in the city of Muzaffarabad in 2012 to offer free healthcare to the district’s residents after the area was decimated by the 2005 Kashmir earthquake.

The T&A raised £81,707 towards the total through its South Asia Earthquake appeal between October 2005 and November 2007.

The campaign started after the earthquake and hearing of the plight of the communities left devastated by the disaster, as many Bradford residents had friends or family killed or injured in the disaster.

Since it opened its doors, the MDA has provided more than 68,000 people which free medical care and offered training to local people and specialist treatment camps since it opened.

The institute has also held two eye camps, in January and August last year, treating more than 1,800 people across the two camps.

The celebration event, held at the Royal Taj Restaurant, in Manningham Lane, yesterday, raised £17,490 towards the charity’s funds. Organisers said a further £5,000 has been pledged by Bradford Council.

Damian Holmes, T&A deputy editor, was among the guest speakers at yesterday’s dinner in Bradford.

Dr Asrar Rashid, executive secretary of the MDA, praised the contribution Bradford residents have made towards the hospital opening its doors.

He said: “The event just underlines the generosity of Bradford to a cause that it has a real connection to. There is a real heritage factor between Bradford and Kashmir.

“This event is a good way for us to give thanks to Bradford and all of the people who have supported us.

“It is a project lead by the people of many different cities, which Bradford is one. We wanted them to know what the money has been spent on.

“Bradford has been a key component in the project.

“We are humbled by the people of Bradford for their support.

“It has been very successful. We promised to run a hospital and we have done that. We are trying to raise more money now.”

The epicentre of the earthquake, which measured 7.6 on the Richter scale, was close to Muzaffarabad, which completely flattened buildings including the city’s hospitals.

The institute’s work also included a sixth form student from Watford Grammar School for Boys making a prosthetic hand using a 3D printer which was sent to the MDMI to be given to a man who had lost his hand.

For more information about the charity, to donate, email support@midlanddoctors.org 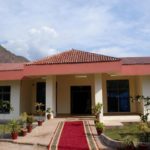 COVID -19 Screening of patients at MDMI