Economists have estimated that the loss suffered by Pakistan is in the region of $15-20 Billion. The aid pledged so far is 1.5 billion dollars and so strife and difficulties for the sufferers of the flood in the future is inevitable.

The devastation of the floods and the misery it has caused the people has been exacerbated by;

The excess water from Sukkur barage i.e above 11 lakh cusecs should have gone to Aliwan ultimately reaching the desert which would have acted as a sponge but unfortunately this did not happen. 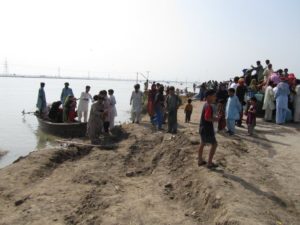 Most of the displaced people are in camps supported by aid agencies but as is often the case in these conditions, food poisoning and gastro-enteritis is very common. Snake bite is rampant with no antisanke venom. Scabies is quite common in camps due to overcrowding. Electricity failures and blockage of sewerage lines in effected areas are a public health disaster.

This is a massive calamity in which the UK has played a great role. We were contacted through a relative Rafiq Soomro by a British aid agency to provide a camp office to distribute money and goods to affected people. This is a joint venture by Oxfam and other groups. They are using my sister’s house in Shikarpur and have distributed 1 miilion pounds mostly in the form of vouchers of Rs 5000/family to buy food. They have hired 14 cars and drivers to distribute various items. Distibution is in a very transparent manner, only registered flood victims get the voucher.

Normally we could reach our farm in half an hour from Shikarpur by car. This time, it was car, boat, tractor and four wheeled drive, all together taking more than 3 hours. The flood affects everyone indiscrimately and even a minister’s car was stranded in the flood. We have set up our own relief camp in a derelict rice mill in Shikarpur and are doing our bit.